Mark has been generous enough to put this new knife to CKTG up for a passaround.

We are all forum vets and know how it goes. Send me you addresses via pm. I'll put out a ship list once we get going. You all know the drill. Five to seven days max, but try to keep it to less. Post a message here when you are ready to send knife along and PM the recipient with tracking info.

Do write a prompt review, even if very short. Others considering this knife will want to know how it performs. We can already see it looks great.

Excited for this one!!
Top

Hello, any more room on this pass-around?
Top

Mark aims to send out today. If so, I'll get Monday, Tues at latest. I tend to use no more than three days before I ship out. Looks like I will ship to Raleigh next Thu or Friday.

Used this intensively for a couple of days and going to ship out today to jeff b. I'll post some thoughts and photos later.
Jeffry B
Top

The Kanjo bunka is as we can see quite a looker in a version of all black (my photos below).

Seems a bit menacing in the list photo, but the black handle actually has a warm tone and the blade just looks ... gorgeous. Fit and finish is outstanding. Smooth handle, no ferrule gap, pristine blade. One of better knives I've come across in that regard, with an unusual closure where the blade enters the handle (see photo).

It's a smallsh knife, light and easy to wield. Very precise and controllable, much like a Konosuke. The contour of the blade makes it suitable for pushing and rock chopping. But not a classic chopper given it's generous - for a bunka - curve. Fine for soft ingredients, but it just doesn't have the heft to chop tougher stuff regularly.

The Kanjo did not come with a great out of the box edge. I don't know if anyone at CKTG used it first, but I'd give it a 5 on Steve G's scale (he almost never gives anything above a 7).

I touched it up with a 6K but did not get it to the level I would have liked, especially on the tip. I didn't want to chance marring it on a passaround, though. If it were my knife I would have dropped down and did an 800-2000-6000 progression. Might be wise for new sharpeners to get the CKTG sharpening service if you buy a Kanjo.

The knife was still plenty sharp to cut celery very thinly. Grapes too. It couldnt get quite as thin with grape slices as the Matsubara bunka I bought at the same time, but still quite thin. i was expecting more resistance on draw cuts with chicken breast, but the Kanjo did just fine.

Since I only touched up on a 6K, I can't say with certainty how the treatment of VG10 stacks up with Tanaka and Kurosaki. Tanaka is clearly the best smith I've come across with VG10. The Kanjo seemed closer to the Kuro, which is also excellent.

The Matsubara, by the way, is outstanding. Obviously being B#2 it takes a sharper edge and it's much flatter and heavier at 6.8 oz vs 5.2 oz for the Kanjo. That make it a much better chopper, particularly on dense ingredients. Great draw cutter too, though the Kanjo held up well with that technique.

Who is this knife for? Lots of folks. Stunning-lookng knife. Precise as I mentioned. Good for small meals. Would make a great gift, esp for significant others with smaller hands. Those who want a bunka to push and rock would like it better than avowed choppers.

Nice addition to the CKTG stable. 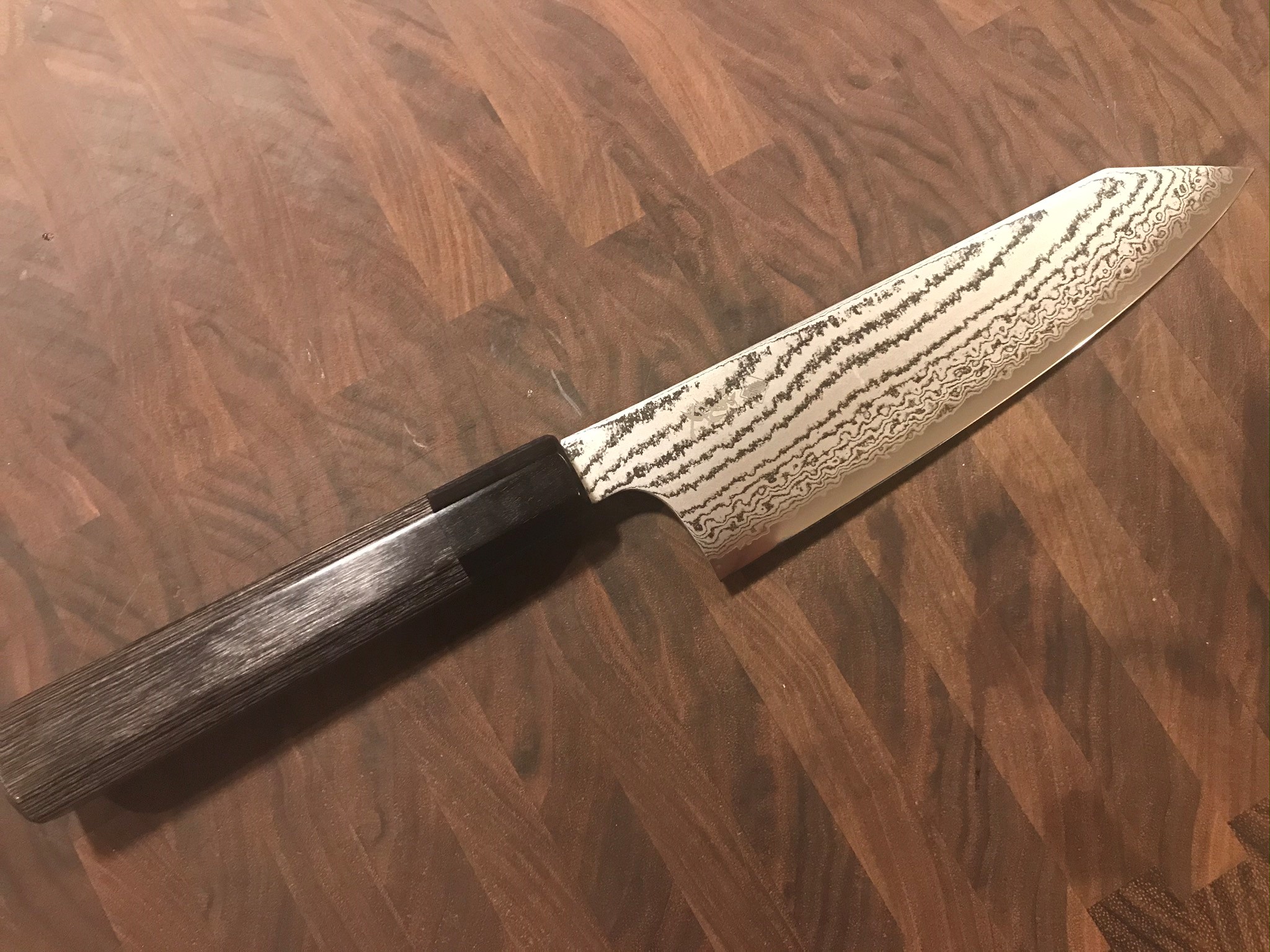 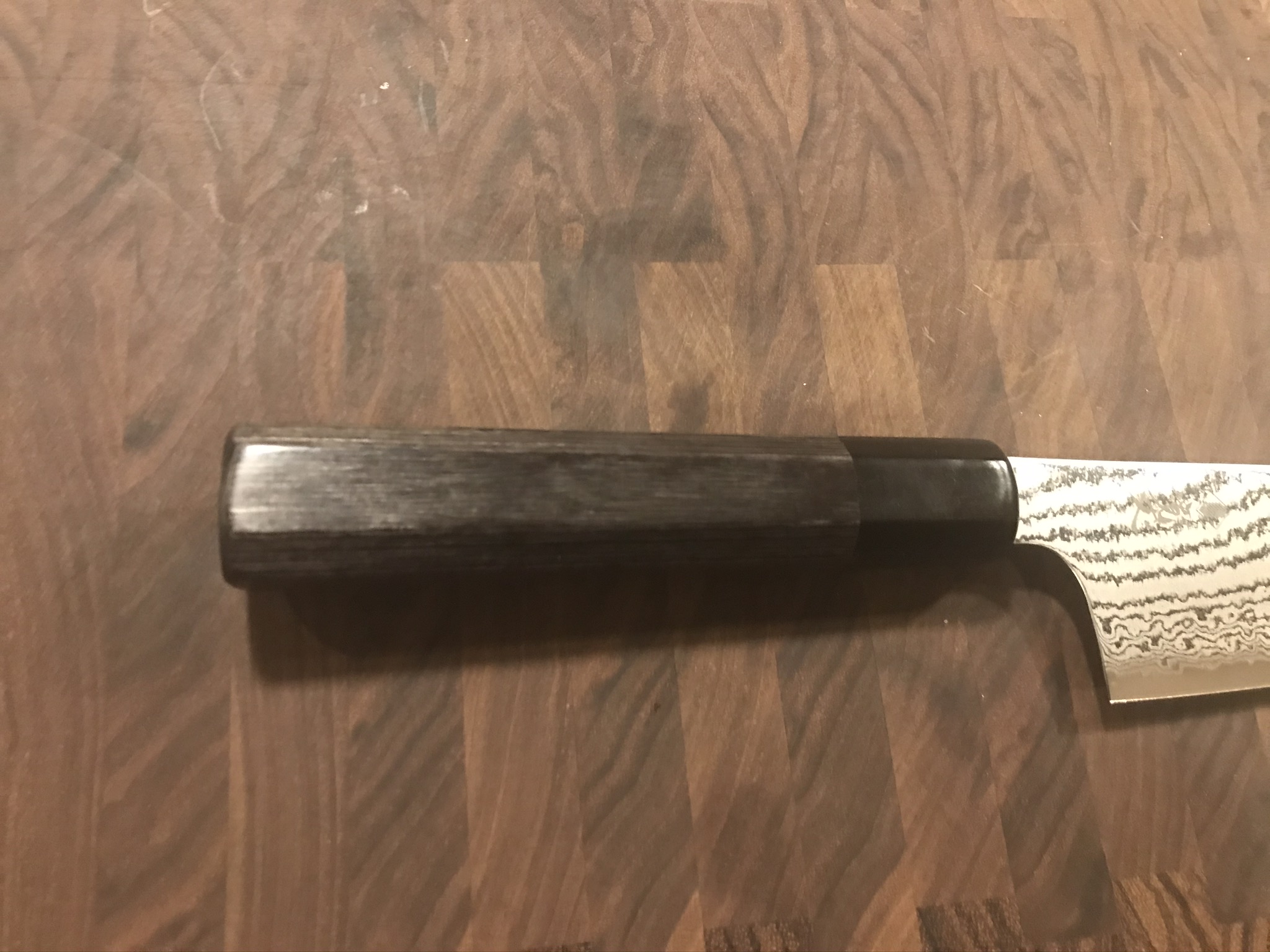 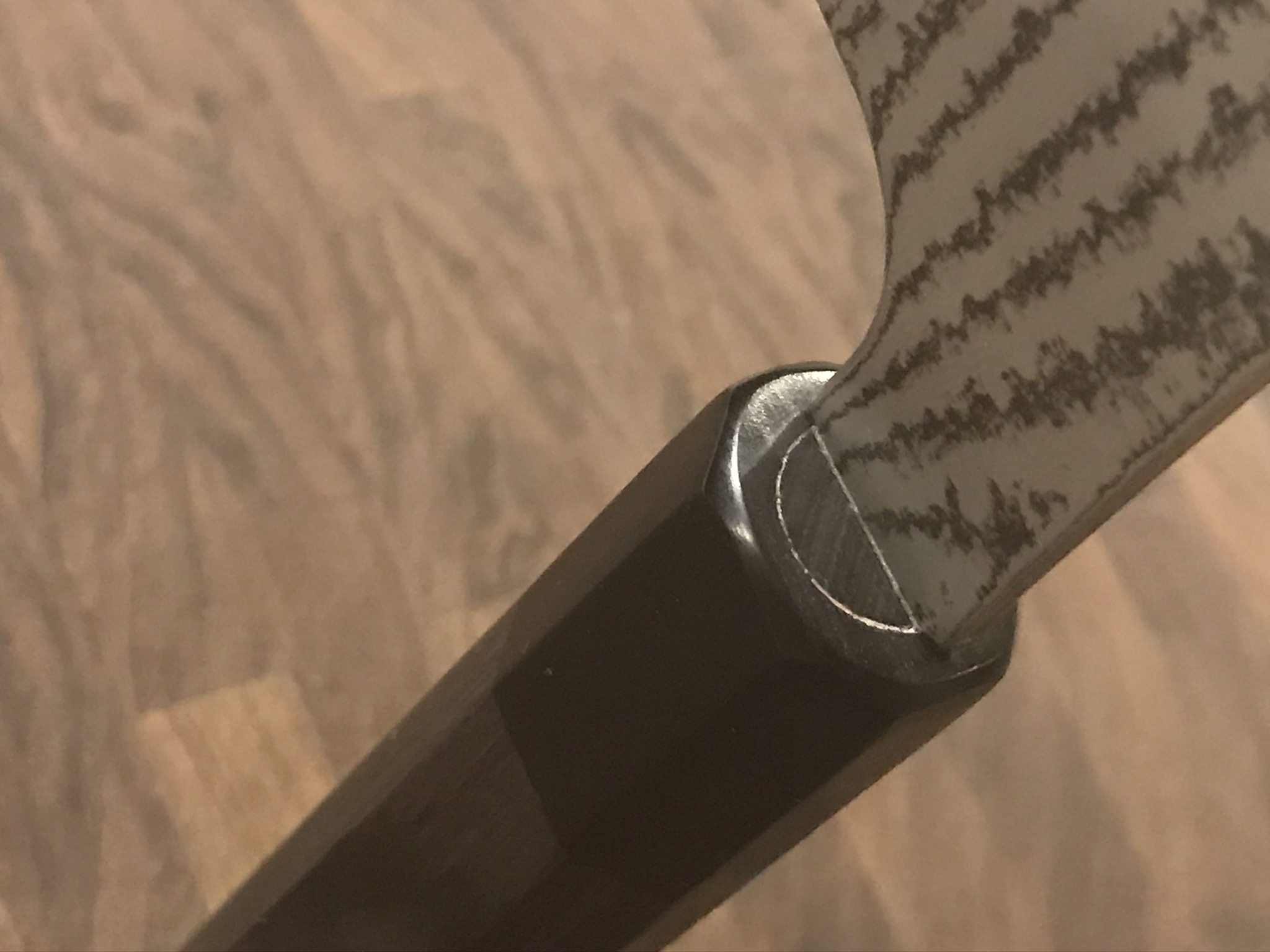 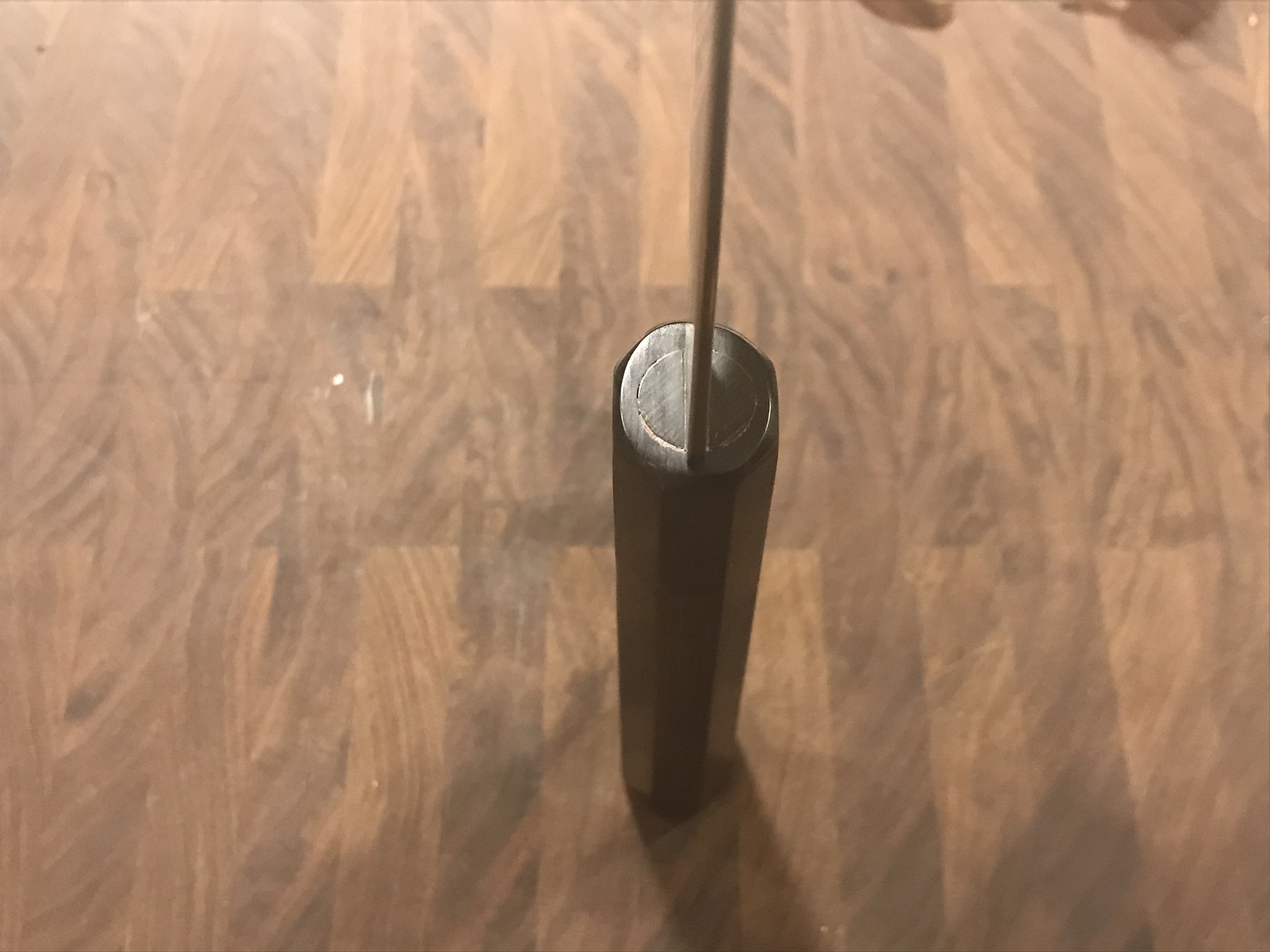 Matusbara on the left, Kanjo on the right 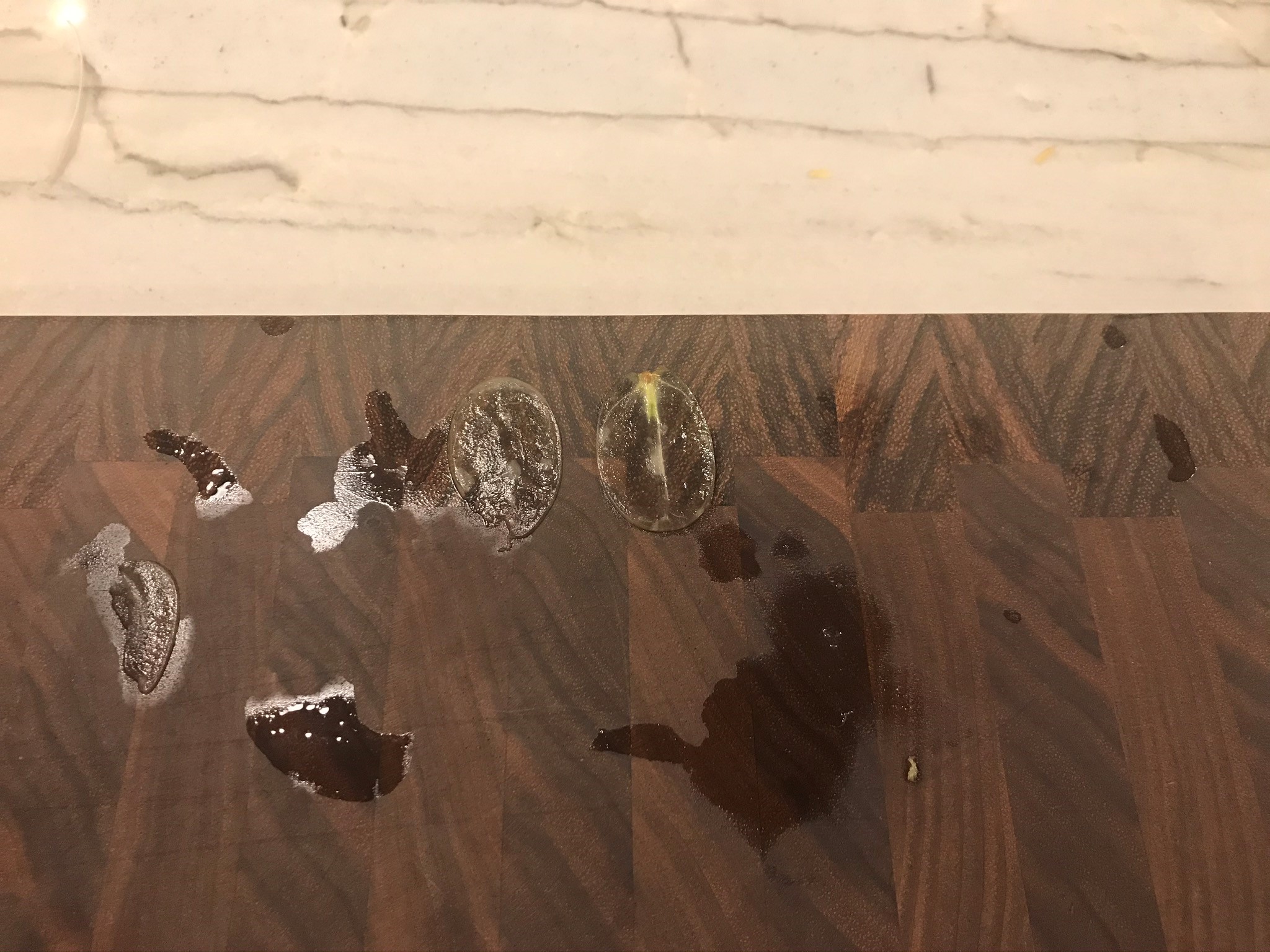 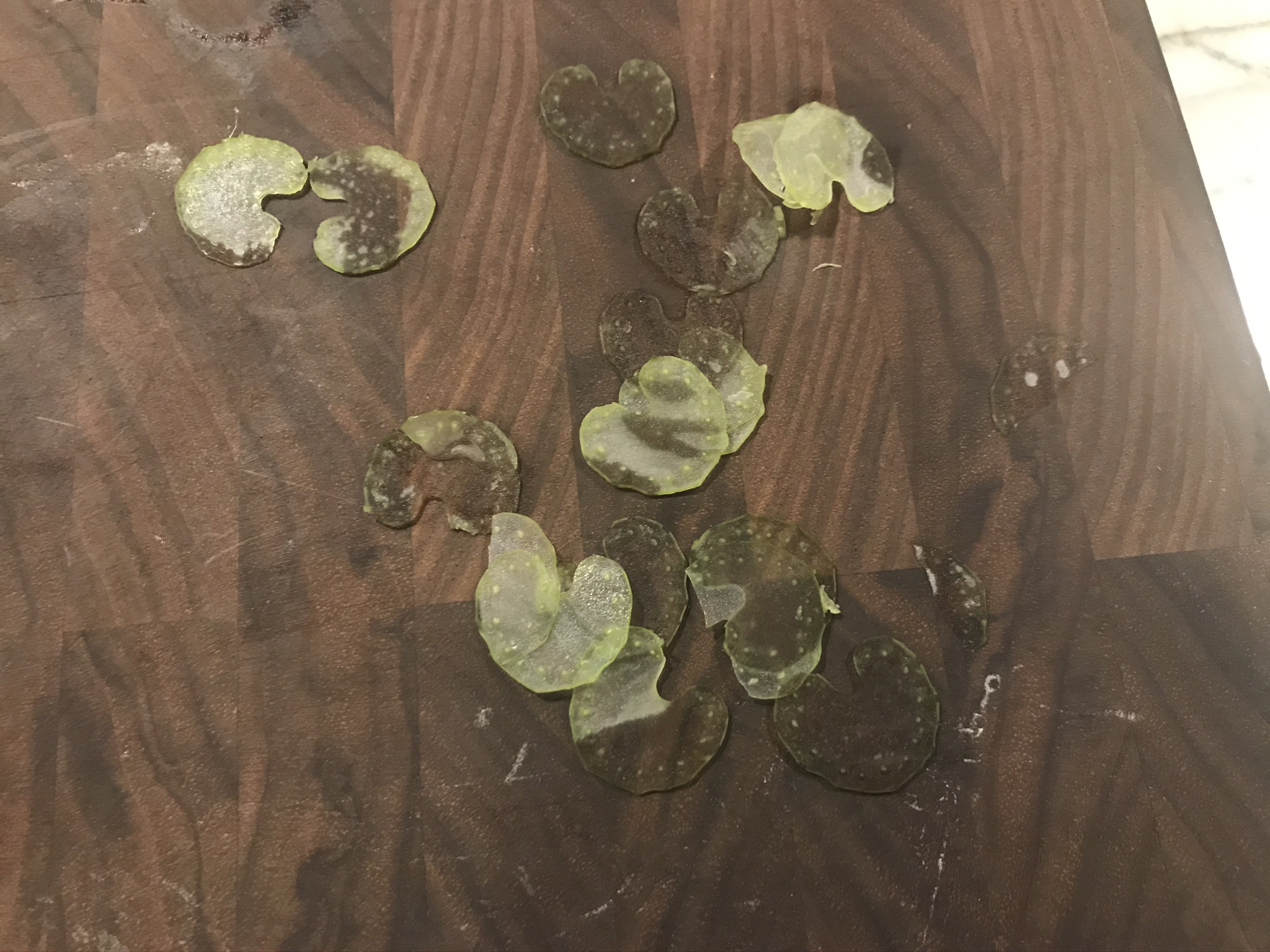 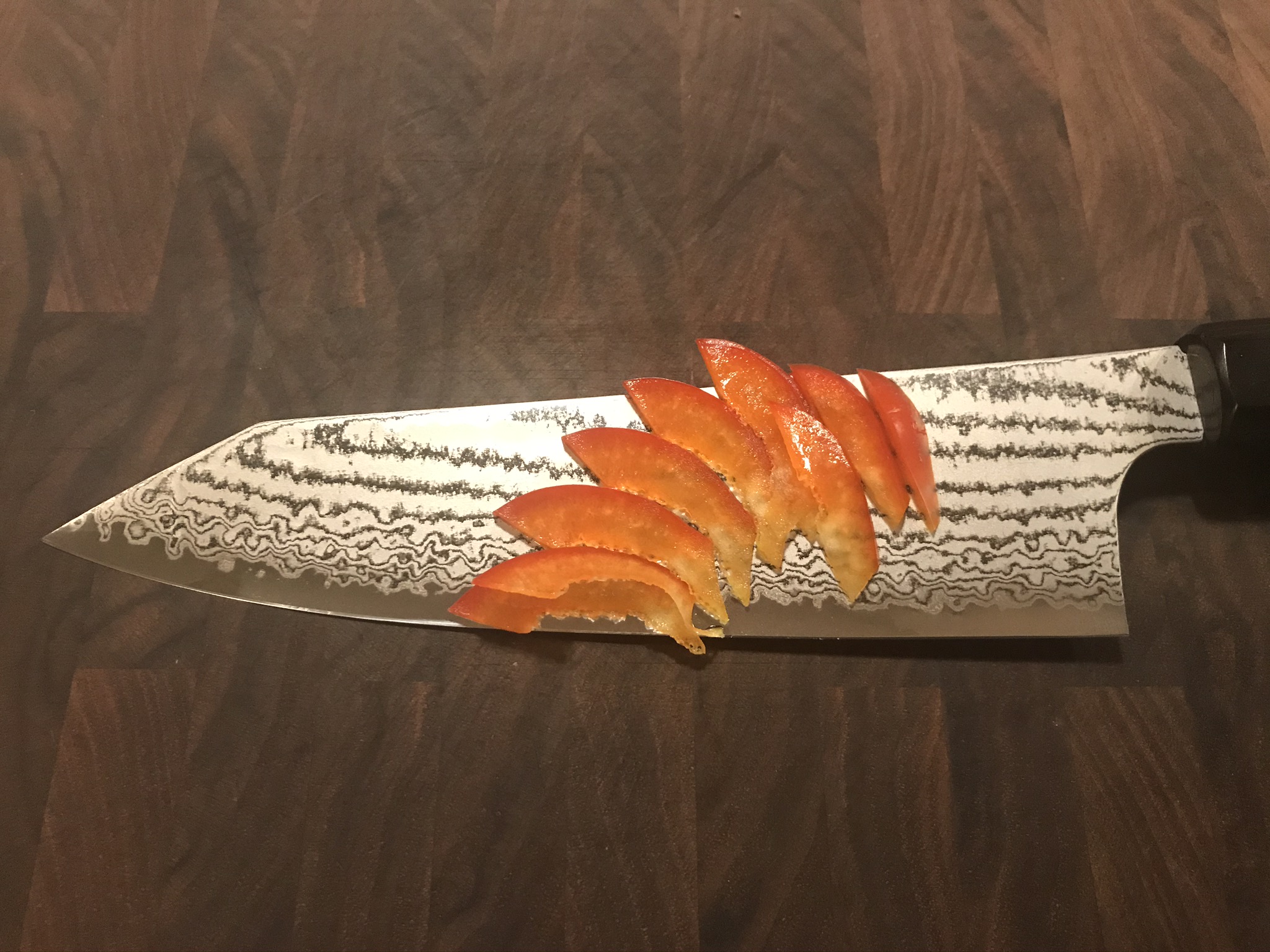 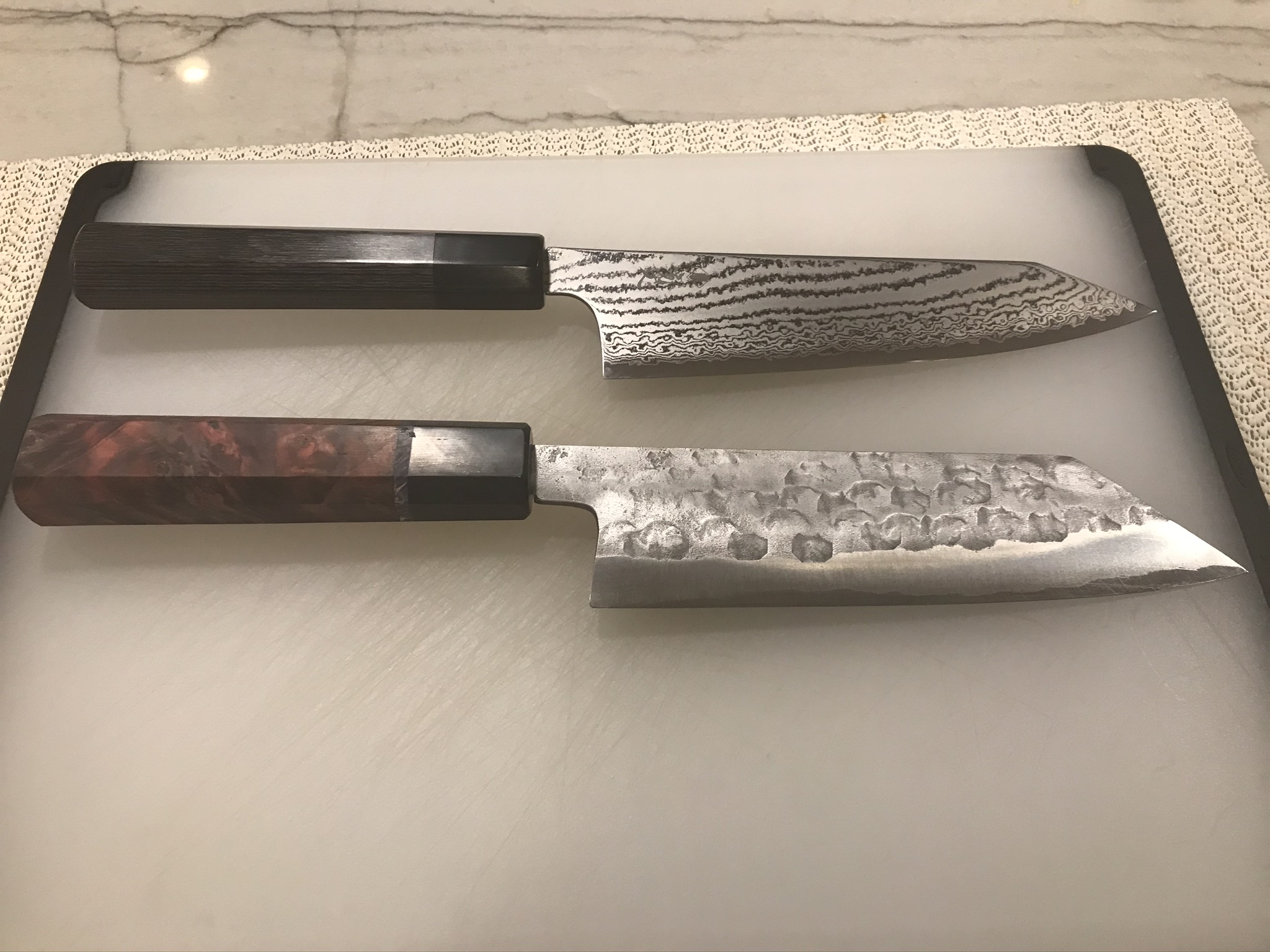 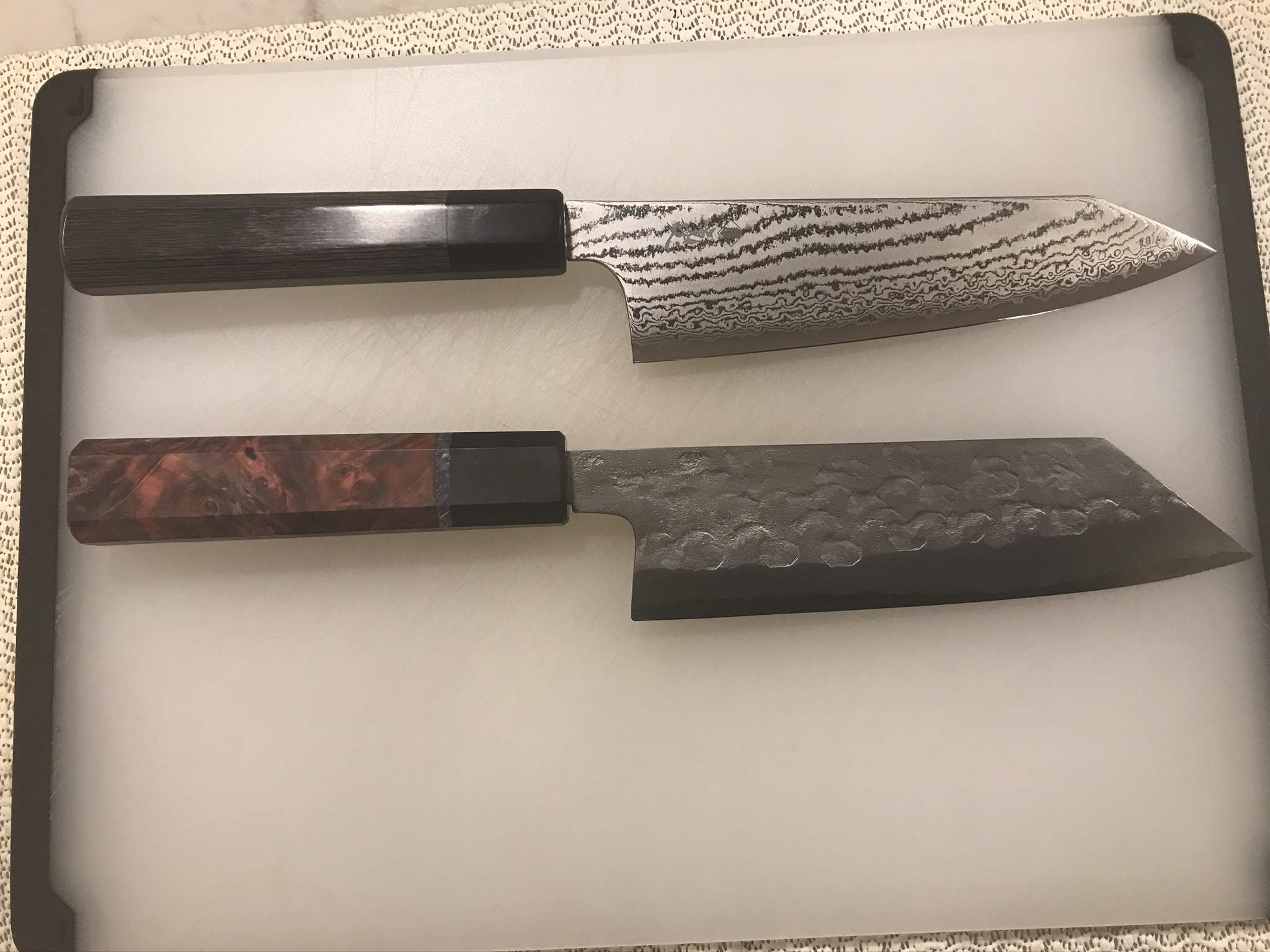 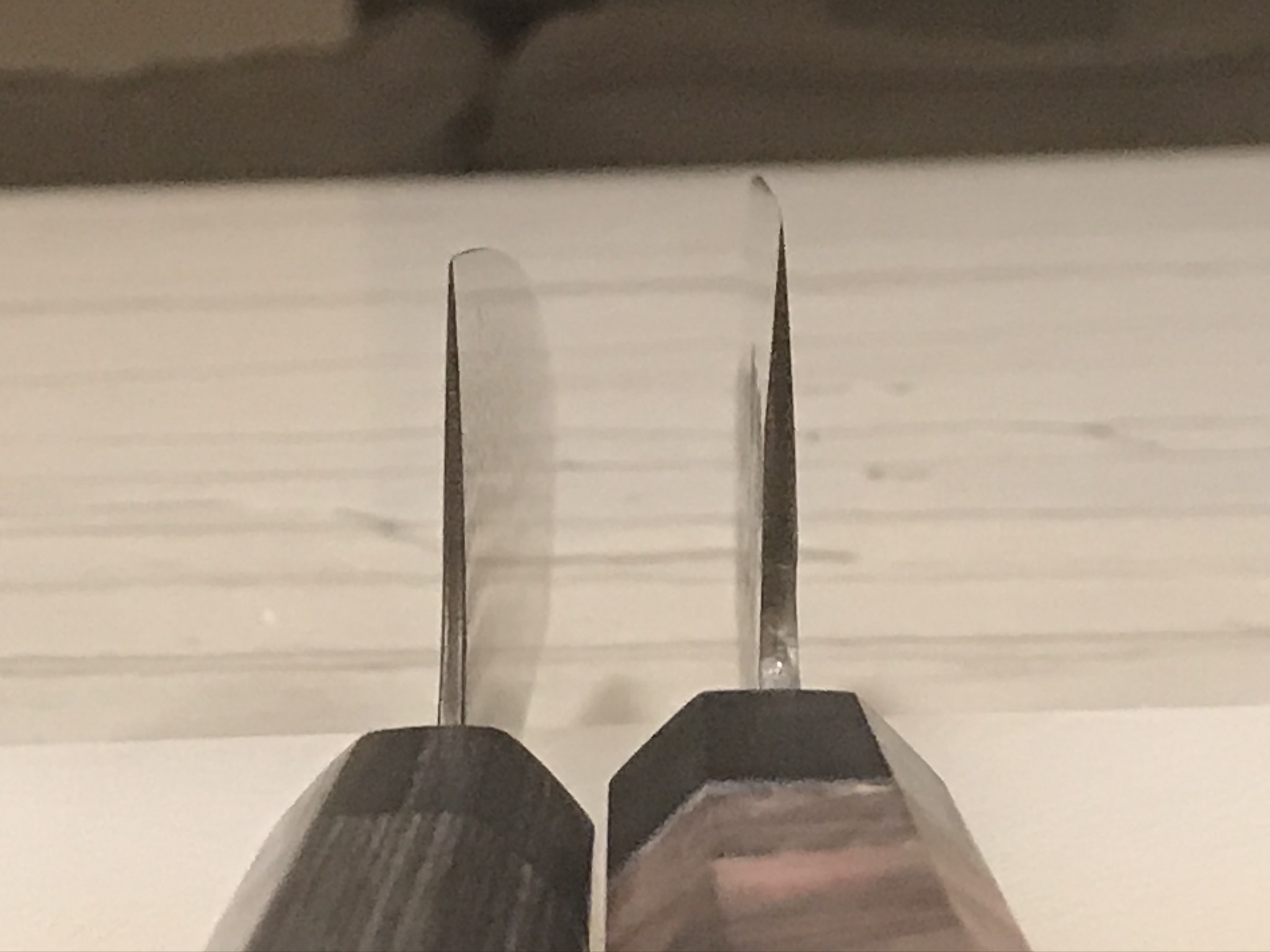 Such a good looking knife. Thanks for the write up, especially appreciate the comparisons to the Matsubara
Top

Jeffry: Did the knife experience any similar negative effects like the previous Yoshimi SG2 passaround? Im talking about the drag caused by the damascus.
Top

Not at all, Bob. Couldn’t really feel the Damascus pattern. Stickage was like any normal j knife.
Jeffry B
Top

My quote is actually related to your larger review. What did the women in your household think of the aesthetics? Did your wife try it out? Many of your comments make it sound like a really great gift knife for perhaps slightly more timid females in the kitchen, if I can be blunt (don't like putting it in these terms, but we all know that there are plenty of forum members whose wives like sharp knives but not 240s, and I have several shorter female friends who also gravitate away from gyutos). As much as the knife is a looker, I'm curious if it provoked any comments from your daughters or wife in particular.
~Joe

Comments: I'm short, a home cook, prefer lighter, thinner blades, and own mostly Konosukes but have used over a dozen brands.
Top

My wife and daughter thought it was a very attractive knife. My wife easily preferred it to the Matsubara. She found the Mat too heavy. The pointy tip of the Mat was also too ... pointy for her. Not the Kanjo.

If I swapped out her Kanehiro ginsan for the Kanjo, she would not have minded.
Jeffry B
Top

bruin wrote: ↑
Sun Nov 24, 2019 8:44 am
Such a good looking knife. Thanks for the write up, especially appreciate the comparisons to the Matsubara

I’ll do a review on the Matsubara soon. Third Mat I’ve owned or used. First bunka that’s really hit catered to all my idiosyncrasies.
Jeffry B
Top

jbart65 wrote: ↑
Sun Nov 24, 2019 4:40 pm
My wife and daughter thought it was a very attractive knife. My wife easily preferred it to the Matsubara. She found the Mat too heavy. The pointy tip of the Mat was also too ... pointy for her. Not the Kanjo.

If I swapped out her Kanehiro ginsan for the Kanjo, she would not have minded.

Thanks! Appreciate it.
~Joe

Comments: I'm short, a home cook, prefer lighter, thinner blades, and own mostly Konosukes but have used over a dozen brands.
Top

Nice review!
Does the Damascus pattern look upside down to you?
My OCD brain kept thinking that the rain drops should be on top while the parallel waves patterns should be on the bottom, is it just me?
[URLtarget]https://m.facebook.com/groups/100200432 ... oup_browse[/URLtarget]
Top

I have the knife right now. The Damascus on this knife is very nice! It has a very slight matt feel/finish to it but not enough to cause any drag. Pictures don't do the handle justice. Food release is excellent on this knife, one of the best I've used. I'll be sending it on it way Monday and have more to say.
If God wanted me to be a vegetarian he wouldn't have made animals taste so good.
Top

Neat looking knife and a nice write up Jeffery. I haven’t heard of Kanjo and took a look at the line after the write up. He makes an attractive ZDP gyuto, tempting. Wish I would have signed on for this one.
“The goal is to die with memories, not dreams.”
Top

Received the knife today and touched it up on the stones. Gets very sharp very quickly. Its a cool looking knife and i agree the handle is really nice. Im working fish station this week (one of my cooks is on vacation) but ill be sure to find some veg projects to use it on.
Top

My girlfriend will be shipping this knife off to miso tomorrow. It's a great little knife. Actually loved the steel and i have had a few vg10 knives. It felt very smooth on the stones and sharpened very quickly and had good edge retention. Its thin behind the edge and beautiful in person. I didn't get to use it as much as i had wanted to but i had few complaints with how it cut. The only thing I didn't love about this knife was a lack of a decent flat spot. Its excellent for roll cutting but it's profile doesn't lend itself to chopping well. All in all I might pick one up as a gift for my brother as that's his go to size and he likes to roll cut.
Top

I'm sorry, we had a last minute change of plans and took off out of town the week before Christmas to see my wife's family instead of the week after Christmas. I forgot the knife may have been coming my way. I found it today while picking our mail from our time away. The box looks in good order though, so I'm assuming the knife is in good shape having not opened the box at all myself. Shoot me the name / address of the next in line and I'll get it out right away so I do not hold up the process at all.

Sorry for the confusion during the holidays. I didn't have a message with any tracking info or anything so I completely spaced that it may be coming and to give you guys a heads up.
I'm Dave. I don't take myself too seriously and you probably shouldn't either.
Top
Post Reply
23 posts