Can you please remove me from the list, sorry for the late notice, might be moving soon.

To all participants...
Can you please keep me informed as to the whereabouts of the knife. When you receive it and ship it on.
Mahalo!

This is the revised list.
Can I please ask you participants to keep me informed about the knife and its whereabouts.
This has turned into a bit of a mystery pass round.

The knife arrived. The edge was rolled a bit, probably from banging around in the saya during shipping. It sharpened very easily and I am going to attempt to make coleslaw with it this evening.
Top

J david wrote: ↑
Thu May 16, 2019 2:27 pm
The knife arrived. The edge was rolled a bit, probably from banging around in the saya during shipping. It sharpened very easily and I am going to attempt to make coleslaw with it this evening.

Yeah, I think that Saya is rough. Also if you feel the tip, it seems a little rough to me like it's banging against it. I had stropped it before only using a little more and it was at least shaving. Steel seems to touch up quickly.
Top

There has been much said about the wavy spine on this knife and its detrimental effect on performance. All I will say on the subject is that it essentially makes the spine 7mm thick all the way to the tip. This combined with the not so thin behind the edge grind means that it takes quite a bit of force to get through product.

As a result, the edge took quite a pounding on the board. I don't want to overstate the beating it took, but I have never needed to work that hard to get through a prep - even before I found Jknives. It had some microchipping along the edge but was still shaving sharp. I don't know what the steel was used, but the heat treat seemed good to me. I sharpened it upon arrival and it was super easy to repair the rolled edge it arrived with. I like the steel.

The profile is nice as well, but I could do without the finger notch. The food separation was terrific as can be predicted by the grind. I did not like the handle. It is one of those things that is probably perfect for the hand it was made for, but terrible for everyone else. I wanted so bad to pound the blade flat and put a wa handle on it.

There were complaints of the KU finish transfering to food. I think the knife was broken in enough by the time it got to me that I didn't experience any problems in this regard.

I feel like art got in the way of performance on this one. I would be keen to try one of his knives that prioritizes function over form with a thinner grind and a simple handle. In the end, I was able to make some delicious coleslaw with the knife.

The saya hurt my feelings. I could not in good conscience ship the knife in the saya. Every time the knife and saya meet, it shortens the life of the edge and consequently the knife.

I'm glad I was able to try this knife and am left with the impression that the blacksmith is very talented, but this is not the knife for most of the people on this forum. It is an attention getter and would be fine for the casual cook, but making a batch of coleslaw with it wore me out.

Thank you to all that made this passaround possible. I'll leave you with some pics. 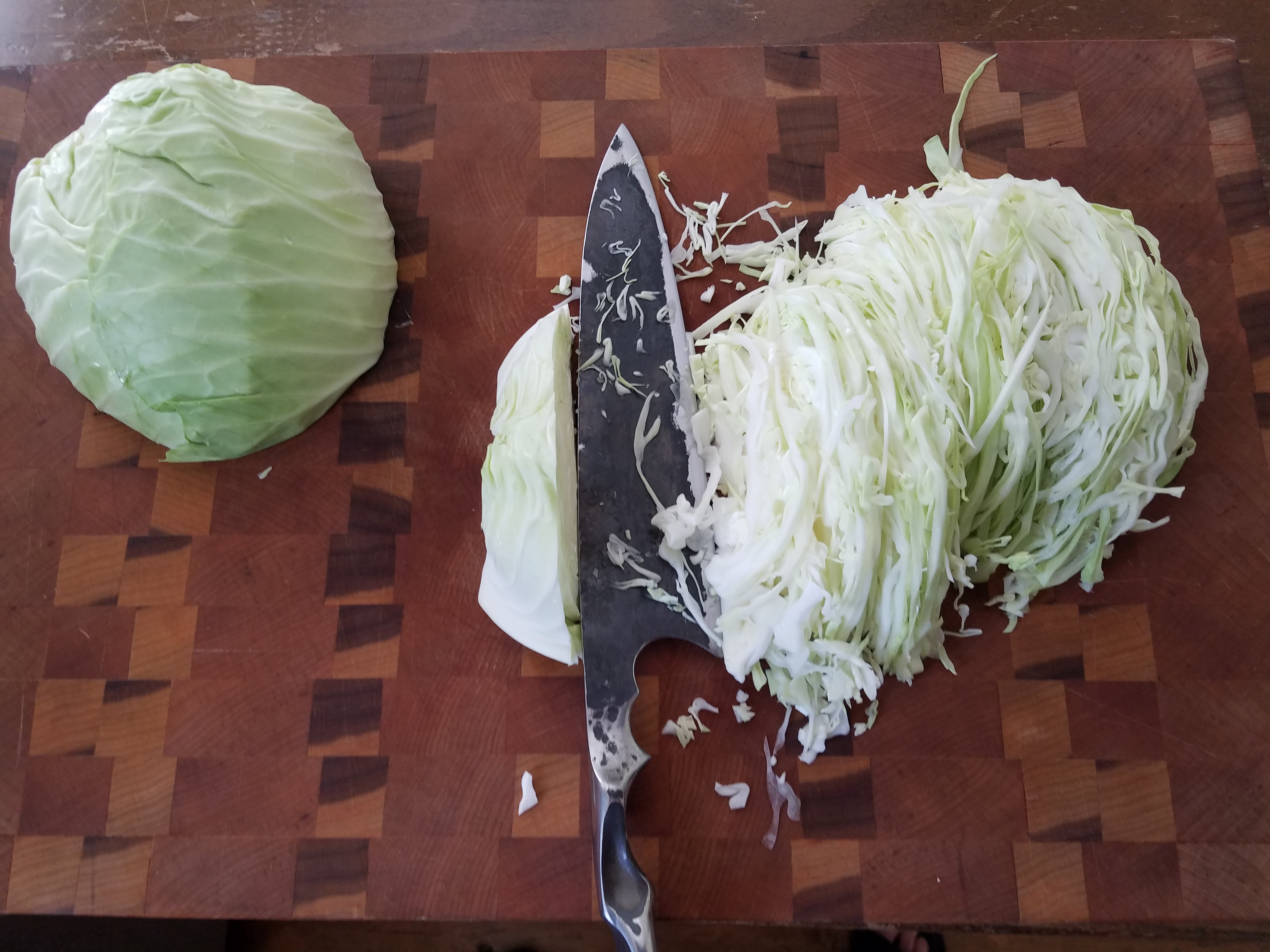 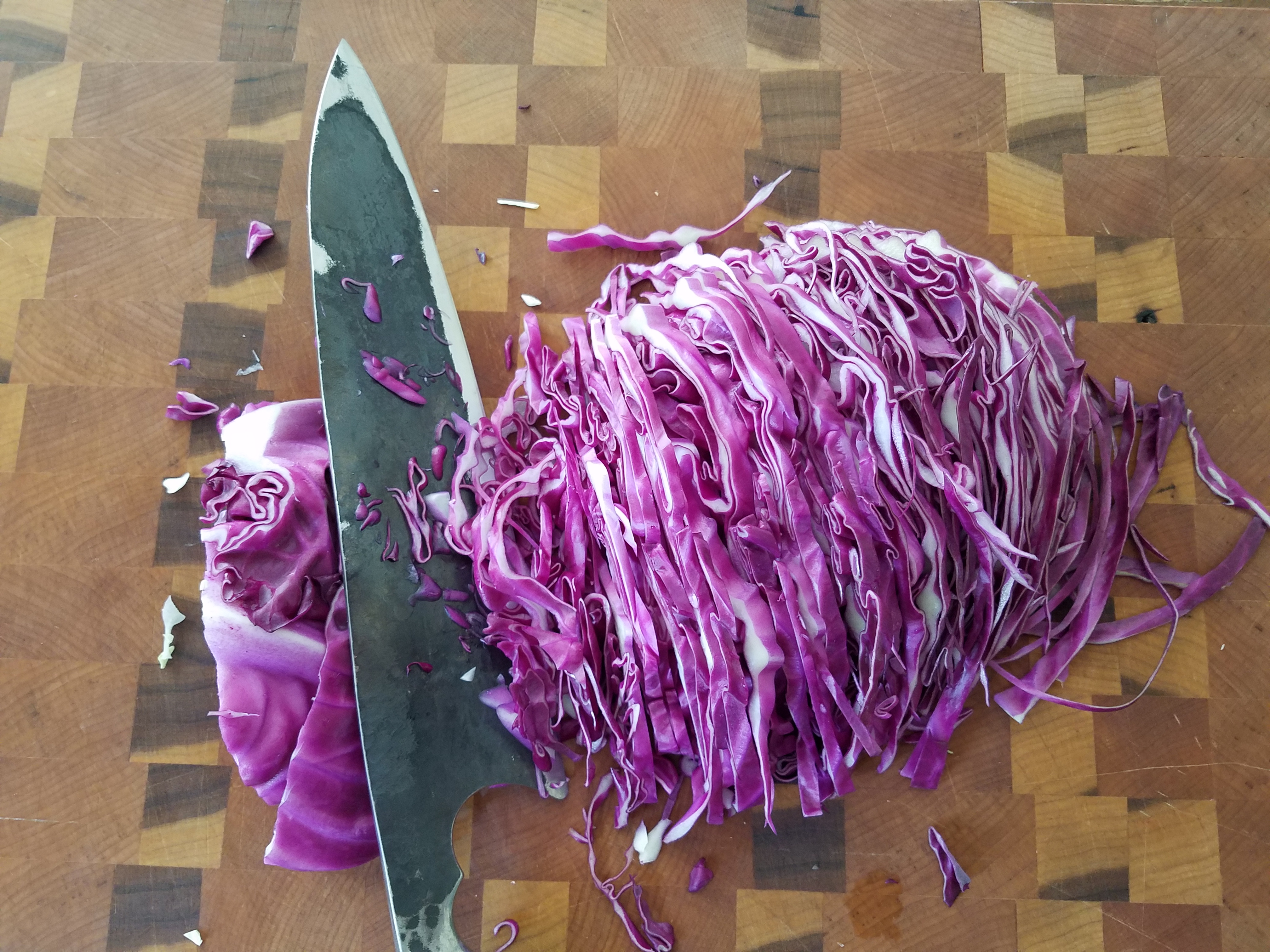 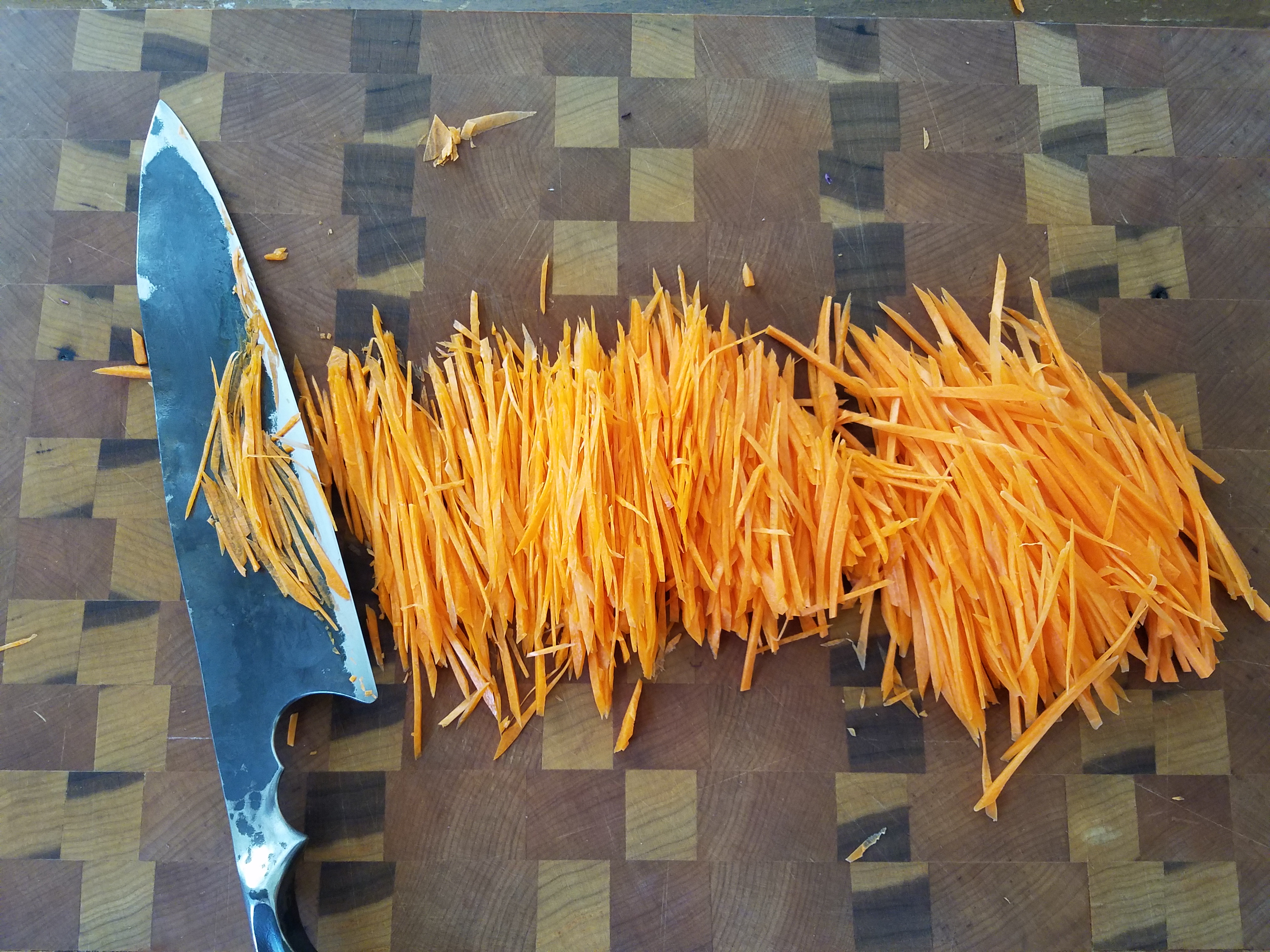 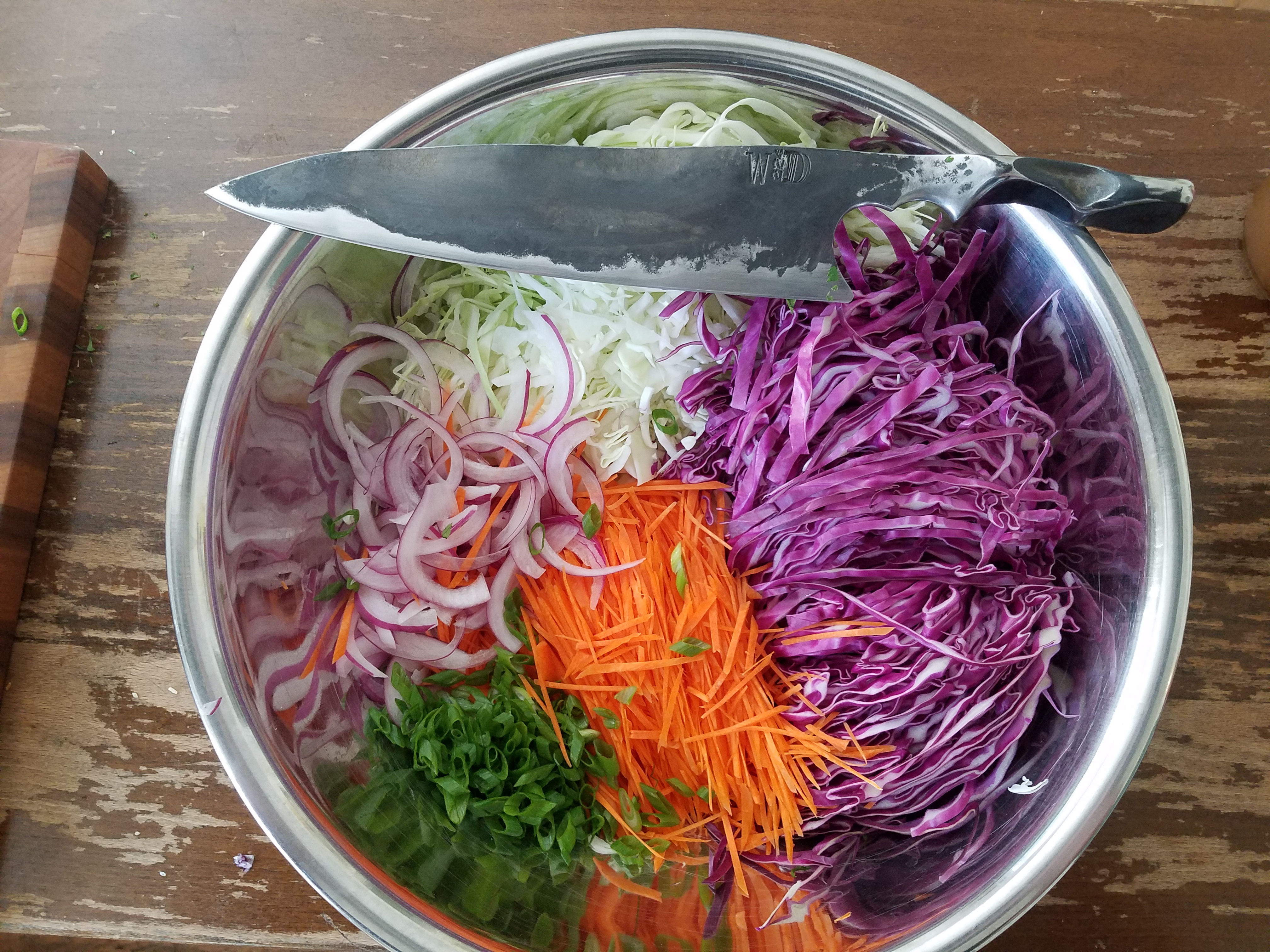 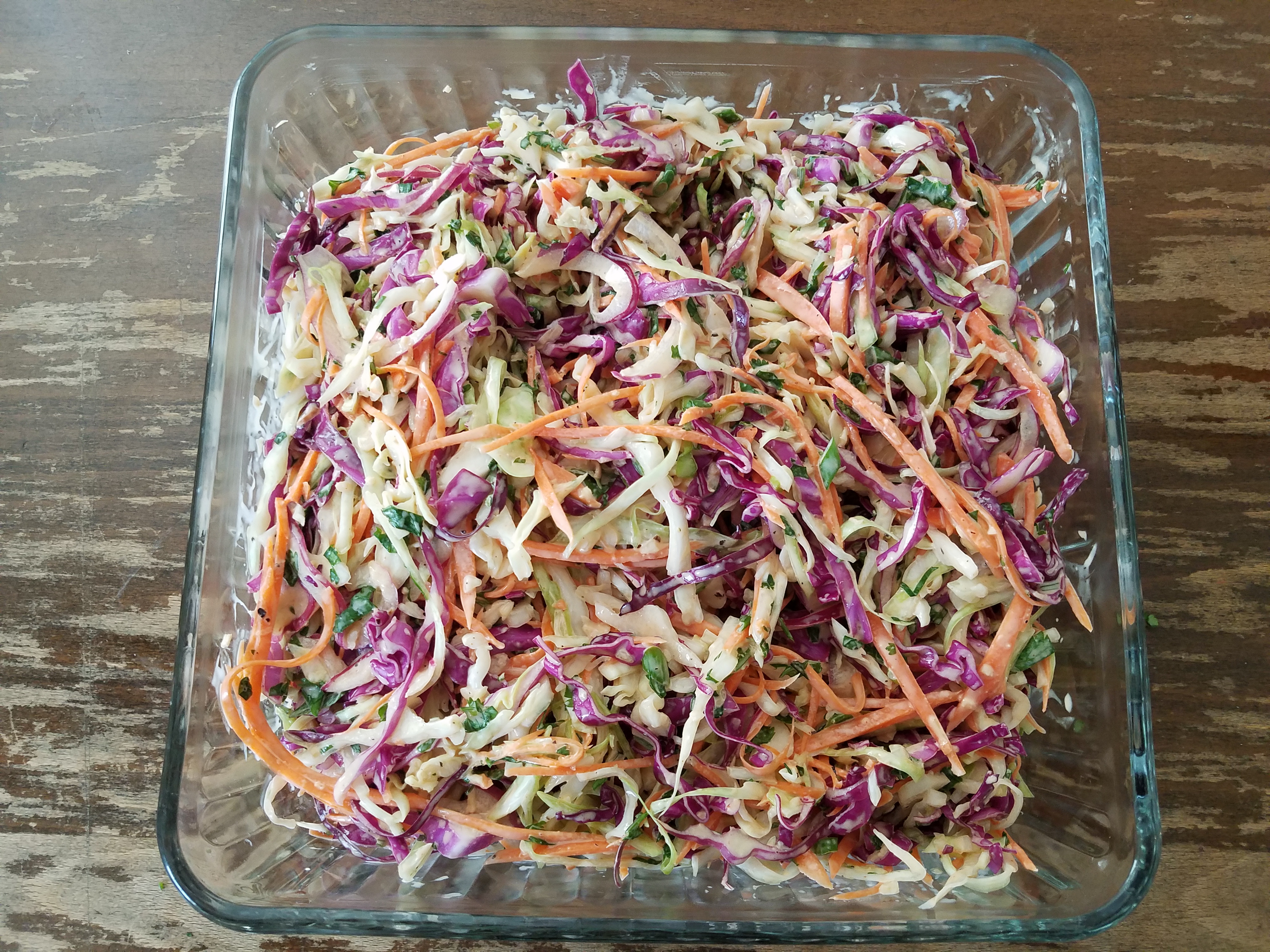 Hi Everyone,
Thanks for all of the great feedback. This knife was an initial foray into the knife world and obviously is a bit of a visual showpiece. Based on all of your notes so far, Charles has made some heavy revisions which should be ready over the next week or so. We may well do another pass-around if people are interested. We really appreciate your help to develop these blades and hopefully, it is fun to be involved!
Who has the knife right now?
Top

Knife arrived.
First impressions will need a touch up, and for my pinch grip the handle isn't quiet comfortable.
I'll know more about the balance and such as I do meal prep with it Wednesday and Thursday.
Top
Post Reply
72 posts