For questions/topics that don't fit into the other, more specific forums.
Post Reply
118 posts

ChefKnivesToGo wrote: ↑
Fri Jul 31, 2020 1:19 pm
We love the postal service and as soon as they get through these difficult times we'll be using them again for most of our shipments as usual. We've made many friends with the carriers that have served us over the past 20 years. We want them to succeed, but we want our customers to get their packages and we owe it to them to do what we can to work around these issues until things are back to normal.

Our current carrier is Mikey and his back up is Ken. They bust their butts for us!

I feel the same way here!
before all of this pandemic made it a little difficult, i used to try to make sure that I would leave iced bottled water in a cooler on my front porch for post just because in Texas it gets so hot in the summer and walking these neighborhoods can be a little bit brutal.
in the winter when I make chicken soup or whatever, I always try to jar up a few to give out because having a nice hot cup of chicken soup that you can even sip out of a glass jar is an awesome treat in the middle of the day especially when it’s cold or the freezing rain that we tend to get here in the winter months.

I would love to see a picture of your typewriter.

Had a package shipped from RI on Friday and it was scanned 5 times the past 3 days and due to arrive tomorrow, nothing to complain about. Service just seems worse in some cities/regions over others for whatever reasons.
If God wanted me to be a vegetarian he wouldn't have made animals taste so good.
Top

At least within the Northeast I've seen improvement over the last week or so. Haven't had anything coming east from out west for a while but as I recall my issues a few weeks back had the Chicago based hub in common....

It's been nice to get the local nj to Long Island and vice - versa stuff back on track.
Top

I can only suppose that the mailman was out of the truck for delivery...?
+1 on the "Yikes"!

“If we conquer our passions it is more from their weakness than from our strength.”
― François de La Rochefoucauld
Top

I wish this message had been delivered with one of our packages. Sue found this last year on the interwebs. 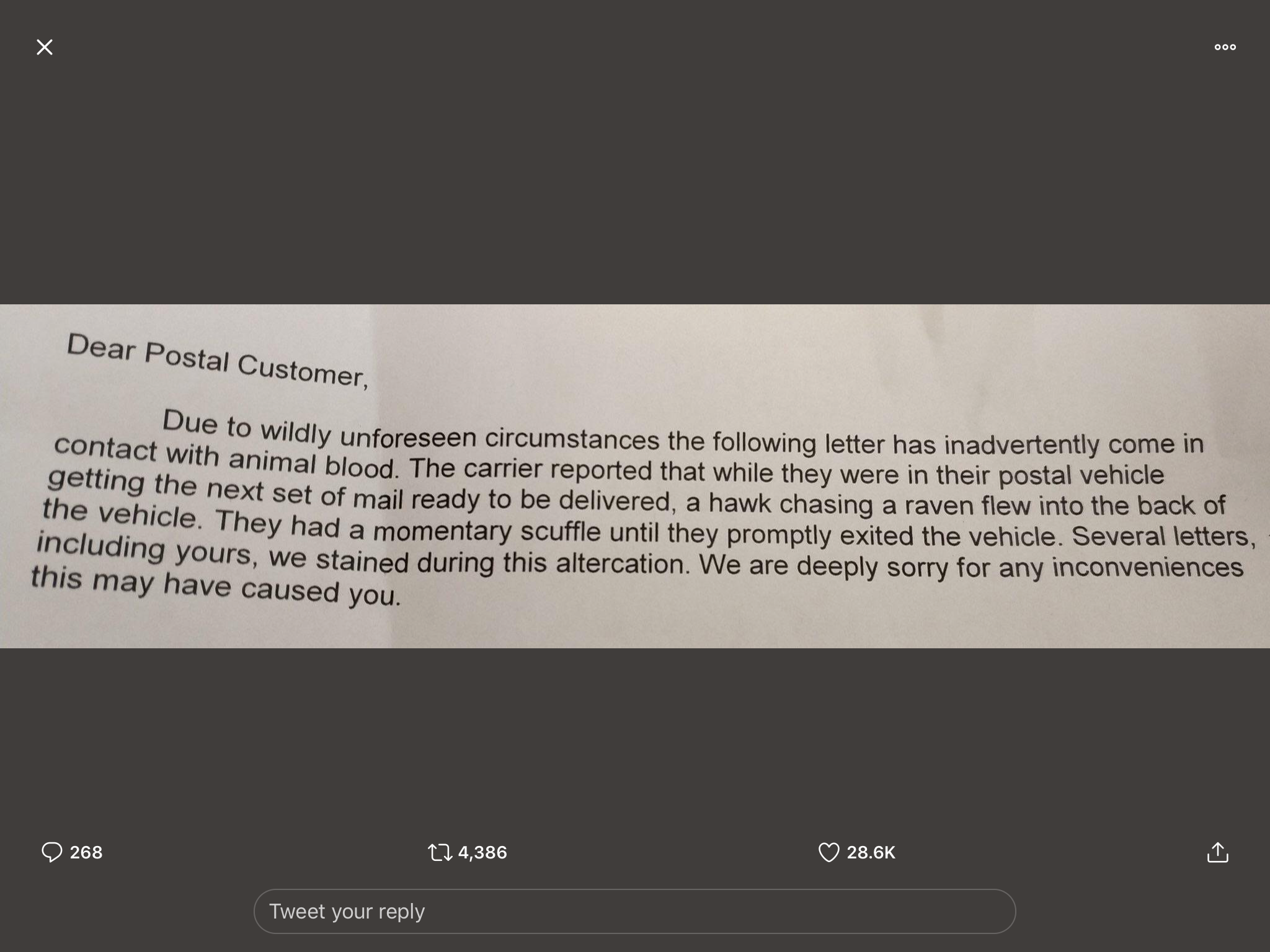 I would have liked to have seen that. I probably look like a fool when a bee gets in, let alone a hawk
Top

An odd case of bird flew [into the truck]

Better than "The dog ate it!"
Top

Lol. The puppy ate it is a real problem lol

I will do that! I'm in the process of moving right now so it's boxed up but here is a picture I took a while ago before I really did a much better job cleaning it up.

Thank you It looks even better now that I've actually detailed cleaned it and polished everything. I really like the way the glass keycaps are very comfortable to type on and they look great. I plan on getting some fitz metal polish and really getting the nickel plating as close to new looking as possible and I finally was able to find good silk ribbons that fit this so in the next couple weeks this thing will be running as good or better than it was when it was new. Once I finally started using it I realized for quick things that needed to be typed out this was a little bit more convenient than setting up my laptop and getting the printer up and running and it just looks nicer then your regular inkjet printer.
Top

I'm going to start posting customer complaint tracking numbers just so we can track ones coming in.

I have another positive CKTG/FedEx story to report. Package shipped this past Tuesday, and scheduled to arrive on Thursday. It arrived on time on Thursday, and tracking was in real time.

I understand the issues raised by the pandemic. However, I've had problems with USPS since before the pandemic. The pandemic may also be impacting the performance of FedEx and USPS, but I've continued to receive excellent service and tracking from both carriers during the pandemic
Ricardo
Top

I have another positive CKTG/FedEx story to report. Package shipped this past Tuesday, and scheduled to arrive on Friday. It arrived as scheduled on Friday, and tracking was in real time.

I understand the issues raised by the pandemic. However, I've had problems with USPS since before the pandemic. The pandemic may also be impacting the performance of FedEx and UPS, but I've continued to receive timely service and accurate tracking from both carriers during the pandemic
Ricardo
Top
Post Reply
118 posts